Agibly has a new owner (Senior Agibly, LLC). While no longer owned, operated by or affiliated in any way with KSL.com or DDM, Agibly still offers free resources for older adults and connects them with professional care providers.

Caring for a loved one with Alzheimer’s disease or dementia can be demanding. Here, you’ll find resources that will help you move forward with a plan for care. You’ll also learn general information about Alzheimer’s and dementia, as well as the signs and symptoms you should watch for.

What is the difference between Alzheimer’s and dementia?

People sometimes mistakenly believe Alzheimer’s disease and dementia are the same. Though the two are related, they are different things. Alzheimer’s is a specific disease, and dementia is a set of symptoms that can be found in connection with multiple diseases, including Alzheimer’s.

Community resources for Alzheimer’s and dementia

Alzheimer's Disease is a disorder that causes brain cells to deteriorate and die. Alzheimer’s is the most common cause of dementia in older adults, which is why the two are often mistaken to be the same thing. Nearly six million Americans live with Alzheimer’s disease. There is currently no known cure for the disease. According to the Alzheimer’s Association, one in three seniors dies with Alzheimer’s or another dementia. Alzheimer’s kills more people than breast cancer and prostate cancer combined.

Experts are unable to explain the exact cause of Alzheimer’s disease, but they know certain proteins stop functioning normally and disrupt the work of other brain cells. This causes neurons to be damaged and lose connection with each other, resulting in cell death.

Cell damage often begins in the area of the brain that controls memory, then spreads predictably to other areas. The process typically begins years before symptoms are evident. Though Alzheimer’s generally affects older individuals, specific genetic changes can affect middle-aged individuals as well (less than one percent of the time), leading to early onset Alzheimer’s.

Look for these early warning signs associated with Alzheimer’s Disease. If you or someone you care for is experiencing these symptoms, talk to your doctor.

When to see a doctor for Alzheimer’s disease

If you or your loved one experience any of the symptoms listed in the 10 warning signs and symptoms of Alzheimer’s disease, make an appointment to discuss it with your doctor.

How is Alzheimer’s disease diagnosed?

There is no single test that can confirm the existence of Alzheimer’s disease in a patient. However, physicians may run a set of examinations that focus on the neurological, physical and mental condition of the patient to form a diagnosis. In addition, physicians may conduct an MRI scan of the brain, which can help confirm or rule out other causes for dementia symptoms.

How to prevent Alzheimer’s disease

Just as there is currently no known cure for Alzheimer’s, there are no definitive ways to prevent the disease. However, there is good evidence that certain lifestyle choices can help promote brain health to limit risk of the disease, including: 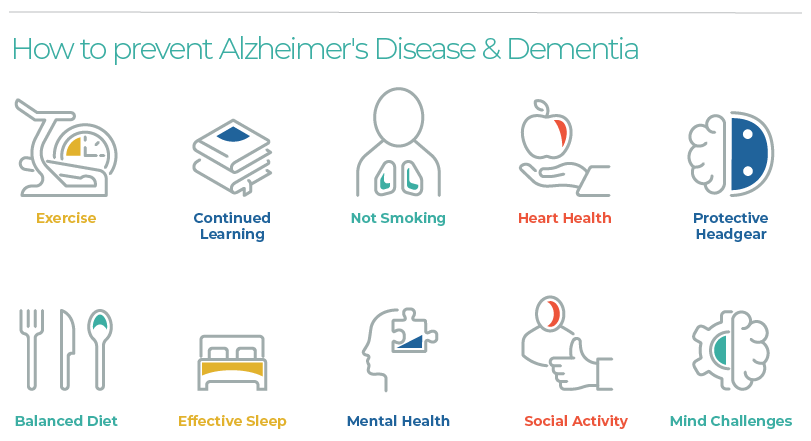 Dementia, officially known as major neurocognitive disorder, is a set of symptoms that show a deterioration in mental abilities, including memory, reasoning and other thinking skills. Dementia symptoms can be caused by a number of diseases, not just Alzheimer’s.

Dementia is the result of damage to brain cells that makes them unable to communicate with one another. Because dementia is a set of symptoms, not a specific disease, it can be the result of different infections, diseases or even physical injuries. While Alzheimer’s accounts for 60-80% of dementia cases, other causes include (but are not limited to) Parkinson’s disease, Huntington’s disease, Lewy body dementia, traumatic brain injury or HIV.

What are the 7 stages of dementia?

Cognitive decline due to dementia is often described on a scale known as the Global Deterioration Scale, or Reisberg Scale.The GDS is separated into seven stages. The signs in stages 1–3 are usually too minimal to make a conclusive dementia diagnosis. Early dementia is evident in stage 4. Stages 5 and 6 are referred to as middle stage dementia. Stage 7 denotes late dementia.

Stage 1: No cognitive decline. An individual has no memory loss and is mentally healthy.

Stage 3: Mild cognitive decline. An individual has forgetfulness that is more frequent than normal and shows signs of mental decline that are noticeable to others.

Stage 4: Moderate cognitive decline. An individual begins to forget recent events, has trouble socially and begins to withdraw from family and friends.

Stage 7: Very severe cognitive decline. An individual has limited ability to communicate and requires assistance with almost all activities. 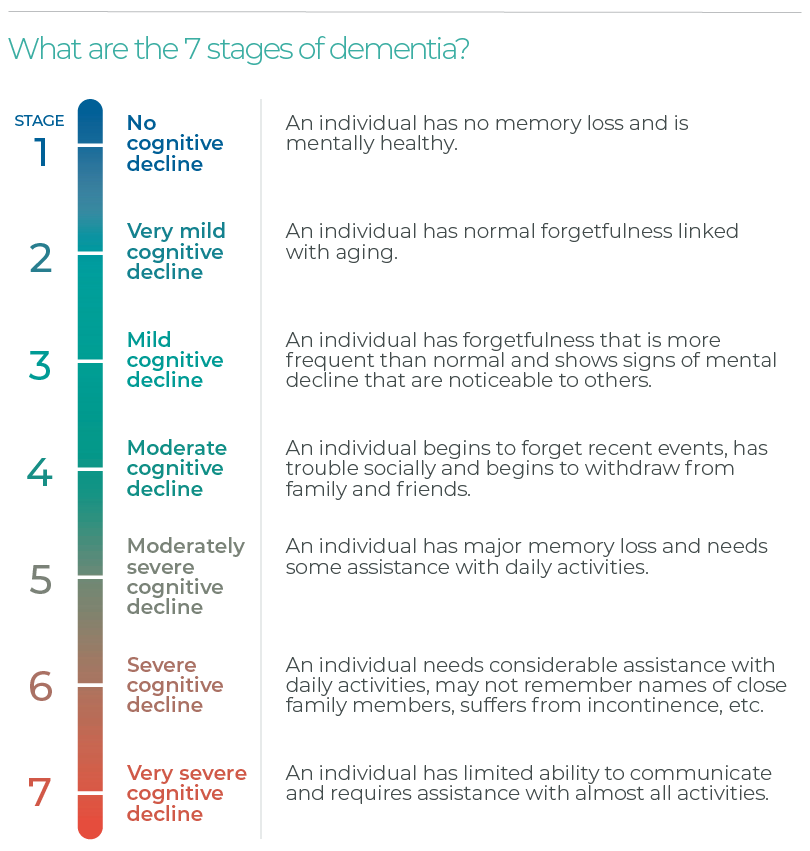 What are the early signs of dementia?

The signs of early onset dementia are the same as those outlined previously in the 10 warning signs and symptoms of Alzheimer’s disease.

When to see a doctor for dementia

See a doctor if you or a loved one experience any of the symptoms listed in the 10 warning signs and symptoms of Alzheimer’s disease.

How is dementia diagnosed?

Dementia is relatively easy for professionals to diagnose. What’s more difficult is determining the cause of dementia’s symptoms. Doctors will look at a patient’s medical history, perform physical examinations and conduct laboratory tests to determine the cause of dementia. If the results are inconclusive, they may refer the patient to a specialist such as a neurologist or gero-psychologist.

How to prevent dementia

Similar to Alzheimer’s disease, doctors recommend certain lifestyle choices to help promote brain health and limit the risk of dementia. These include:

If you or a loved one are showing signs of dementia or Alzheimer’s disease, reach out to your doctor or one of the community resources listed.